Drunk driving is a dangerous behavior. When a person drives under the influence of drugs or alcohol, they are essentially operating a 5,000 pound missile. Vehicles can quickly turn into weapons when operated by someone who is intoxicated.

So the next time you consider driving after having a few drinks, you need to remember the drunk driving and motor vehicle accident facts listed below. If you were hurt by a drunk or negligent driver, contact our Indianapolis personal injury lawyers for help recovering the full and fair compensation you deserve.

According the CDC (Centers for Disease Control and Prevention), these are the most recent statistics and facts regarding intoxicated driving accidents and fatalities:

⇛ In the United States, 28 people die in an alcohol/impaired driving accident, EVERYDAY. That equates to 1 death every hour.

⇛ In 2015, 29% of all motor vehicle crashes that resulted in fatalities were caused by drunk driving. That means that than 10,000 people died that year in an alcohol-impaired car crash.

⇛ More than 1 million drivers were arrested in 2015 for impaired driving.

⇛ Separate from alcohol, 16% of all motor vehicle accidents are caused by legal and illegal drugs.

⇛ It is suggested that younger individuals (under 24 years old) are more likely to be involved in a serious motor vehicle accident as a result of intoxicated driving.

⇛ Drug users are 25% more likely to be involved in a motor vehicle accident compared to non-drug users.

⇛ In 2015, 27% of all motorcycle accident fatalities were alcohol impaired related.

⇛ The highest percentage of deaths (37%) among motorcyclist accidents are between the ages of 35 and 39. 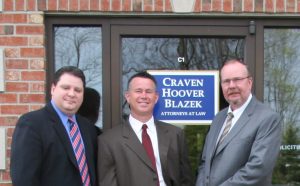 Call Craven, Hoover, and Blazek P.C. at 317-881-2700 to speak with a licensed car accident lawyer in Indianapolis, Indiana. We never collect attorney fees unless we obtain compensation for you, and we also offer free initial consultations. Get started on your physical, emotional, and financial recovery today!